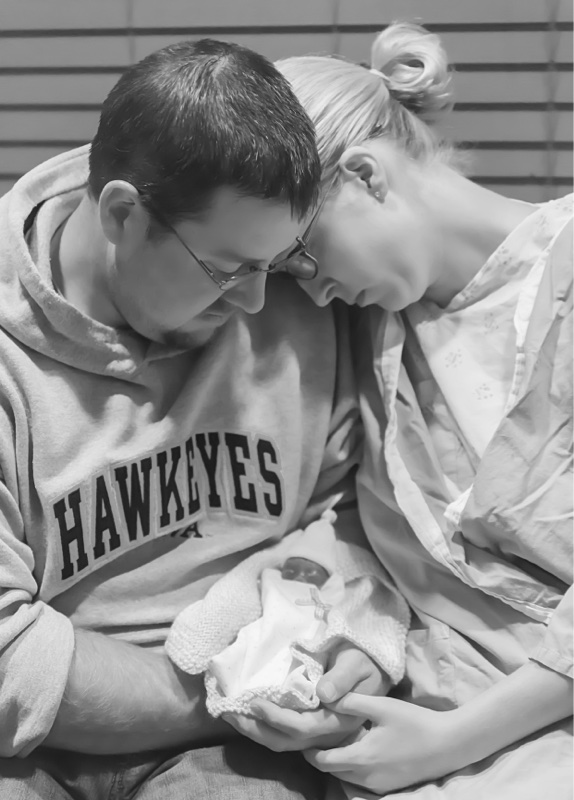 When my husband, Tyler, and I learned we were pregnant with baby number four, we were surprised, scared, and excited. I remember the night we found out and the overwhelming mix of emotions we experienced. When we decided to tell family, we weren’t very far along. We were hoping for excitement, encouraging words, and the support we needed to ease our minds.

We did get some excitement from my close family, especially my sister. She’s been my rock and best friend forever, and of course she was excited for us. But we didn’t get the encouragement or happiness from some of our other family members, which was disappointing. I regret letting this bother me so much, as it ultimately caused me to question my own feelings of excitement. While it’s in the past, I know I will always feel bitterness toward the ones who couldn’t give us a simple “congratulations” for the announcement of a new  life.

The first few months of pregnancy were rough, with days of constant nausea. I was sick and unable to eat much. I knew there was something different about this pregnancy from the beginning, and many people suggested that those differences meant we were having a girl this time.

Eventually, the nausea went away, and things were pretty uneventful up until around nineteen weeks. I started having cramping and spotting, which made me nervous. On October 17, we went in for an ultrasound. We learned that our little peanut was a boy! We were so excited! Our little man, Tanner, had a good, strong heartbeat, and his anatomy was all great.

But there were some things that the ultrasound tech was questioning, and I began to worry. She wouldn’t answer us about whether everything was okay after she moved to cervix measurement. I remember a nurse coming to get me from the radiology waiting room with a wheelchair, and I cried because I was so scared. My midwife explained that the ultrasound showed I had a short cervix. A call to another obstetrician suggested this was not something that needed immediate attention—since I had carried three babies to term previously—and this likely would not affect my pregnancy. I started on progesterone and was scheduled for a consultation with that obstetrician, Dr. O, for the end of the week.

In the meantime we announced to our boys that they would be gaining another baby brother. The excitement on their faces when they sprayed the blue silly string was priceless. They were so happy and couldn’t wait to tell everyone the great news!

I continued to have spotting and cramping, and two days later, on October 19, I had an increased amount of blood. I had myself convinced I was losing my baby, and we rushed to the Birth Care Center. We saw an OB who checked me and ordered an ultrasound. At this point, the ultrasound still showed a healthy, active baby, and my cervix was actually measuring longer. Since I was still having the cramping and spotting, the doctor suggested that I likely had some sort of infection that was causing irritation. When I inquired about having a cerclage placed, she declined, adding that my body would likely try to reject it since it was already dealing with the infection. I left the hospital with instructions to carry on as normal and to keep my upcoming appointment with my obstetrician, since I would now be considered high-risk due to the bleeding.

We left the hospital and made a few stops before going to pick up our youngest son, Oliver, at daycare. As soon as I got out of the car to walk to the door, I felt a gush of fluid. I used the bathroom, where I continued to leak more. I ran out of the door yelling at my husband, Tyler. We had to go to the hospital—immediately. I cried the whole way, thinking, This is it, I am losing my baby. I thought losing your water was a sure sign that labor was starting. Crying hysterically, I called my midwife and asked if there was anything they could do. When she said no, I cried even more.

As soon as we arrived at the closest hospital, located in Manchester, Tyler got me in a wheelchair and ran to the obstetrics wing. They put me in a room at the end of the hall, and I waited for my midwife. I continued to leak more fluid during this time, and was terrified this meant my baby boy would be coming soon. My midwife came and tested the fluid to be sure it was amniotic—and as I knew deep down, it was. She got the heart Doppler, and once again I heard my sweet baby’s strong heartbeat.

After some time and making sure I wasn’t in active labor, I was sent home to be on bed rest until my appointment. I was terrified to be going home so soon after losing my water, in case I started having contractions and had him at home. I was given the option to terminate the pregnancy due to the risks of infection, and I refused. There was no way I was going to give up hope when my baby was still alive.

The next few days were spent lying in bed and researching all I could about preterm premature rupture of membranes, or PPROM. This occurrence is so rare that it’s hard to find any facts about it other than the likelihood of mortality and stories of the grim outcomes. But eventually, I found a page on Facebook called Little Heartbeats. They gave me so much information and guidance about what to do to care for myself in order to have the best possible outcome. The group also sent me a care package that included even more information, as well as two stuffed animals to record Tanner’s heartbeat onto.

That Friday, October 21, we went to see the obstetrician. First, I had an ultrasound done, and when I told the tech why I was there, she got the doctor to confirm the type of ultrasound needed. Dr. O was unaware that my water had broken and questioned if it really had—until the ultrasound began and he could see there was no fluid. He left the room, and we continued with the ultrasound. It was hard to see much of the anatomy without the fluid surrounding Tanner. We did see his strong, beautiful heartbeat one more time.

When we met with Dr. O for our consultation, he gave us the grim outlook. He told us that the chance of making it to tweny-four weeks (viability) was slim, but if we made it there our chances, would get slightly better to make it further—as far as thirty-four weeks, we hoped. We left that appointment and made a follow-up appointment—one that our doctor was not anticipating we would make it to. I’m glad he didn’t sugar-coat the picture, but I felt he gave us little to no hope of a positive outcome. He suggested I continue with modified bed rest, meaning I could get up and move around some and wouldn’t need to be confined to my bed. This was a relief to me, as I could get a change of scenery and be able to spend a little more time with the boys.

Two days after our appointment with Dr. O, I woke up to the boys chattering and coming in to say good morning. The night before, I had been pretty restless, tossing back and forth, and this is the horrific morning that plays over and over in my head if I let my mind wander too long. This is the morning I had cord prolapse (meaning the umbilical cord made its way through the cervical opening and was ultimately no longer where it should be).

That trip to the hospital was the longest ride of my life.

I delivered my angel Tanner sleeping at 8:25 p.m. on October 23. He weighed eleven and one-half ounces and was ten inches long. He was the most perfect little baby I have ever seen in my life. He looked like a “normal” baby in every way, other than the fact that he was so small. 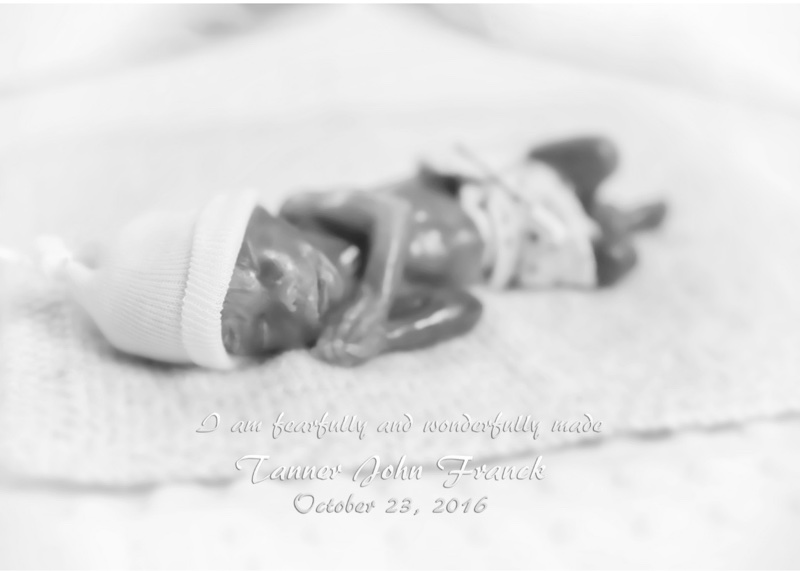 When the doctor told us  there was no heartbeat upon delivery,  I was both relieved and saddened  beyond belief. I didn’t want Tanner to suffer, and I knew they would do nothing to save him since he was only twenty weeks. I held that sweet boy and cried like I’ve never cried before. I cried for the little life that was no longer inside me. I cried for the future of a baby that was cut short. I cried for the pain of my boys, who less than a week before were thrilled to be having another brother. I cried because he was my baby, a part of me, and he was gone. 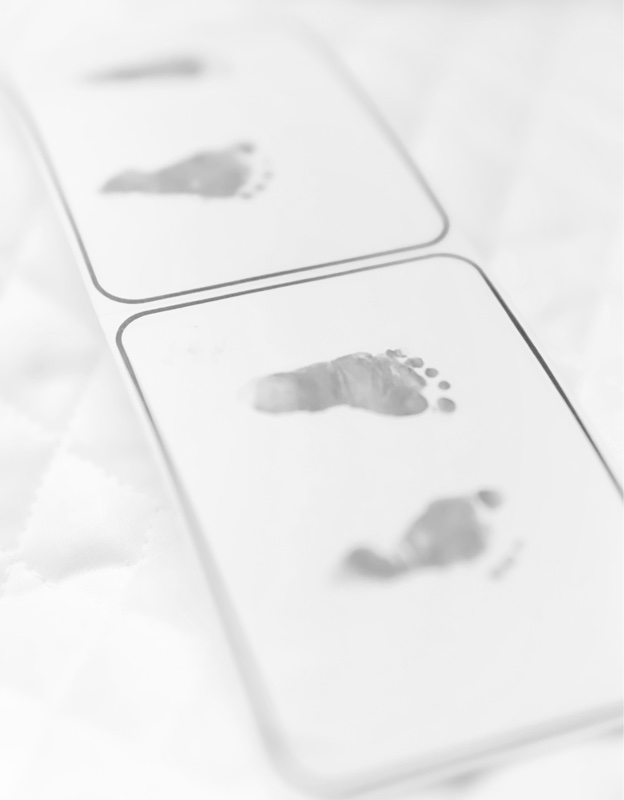 The days since Tanner’s passing and funeral have been hard. I heard from plenty of people that it would get easier but never believed it actually could. Yet here I am, and I can tell you it has gotten easier. With the help of a wonderful bereavement counselor, who got me through the ups and downs of the first few months after Tanner died. With the help of my loving and supportive husband, who is always here for me to cry with or talk to. And with the help of a few close friends, and my mom and sister.

We've created a nonprofit called Loving Tanner that provides love and support to those facing miscarriage, stillbirth or infant death. Our website lovingtanner.com offers a place for families to find resources and support as they walk their grief journey.

The 12 hours we were able to spend with Tanner were because of a CuddleCot and we’ve since learned that many hospitals don’t have these devices available for families facing the loss of their baby. These are so important to allow the family time to spend with their baby instead of having them taken away soon after delivery. These allow time for pictures to be taken and for other families to come and meet the baby without the dramatic changes that would otherwise occur. We’ve started Tanner’s CuddleCot Campaign to raise money for placing these at local hospitals that don’t already have them. To date we have raised money for three CuddleCots with other hospital donations in the works.

While helping others facing loss has helped to heal my heart, I still long to hold my baby, and I always will until the day I die. I still wonder what life would be like with him and who he would grow up to be. I still torture myself with the what-if’s and the should-be’s. But the overwhelming feelings of grief have lessened. The bad days are fewer and less intense, but when they come, boy do they come. And when they do, I hold on tight and let the tears flow because this is the only way I have to experience my little boy that never got to stay here.

I know that Tanner is with me, and I feel him every night when I hold his blanket. I’ve made him a promise that I will honor his short but very important life by helping others who go through the same experience as me, helping parents who have lost their babies try to find some peace. I have promised Tanner that I will never forget him, and I will do all I can to make sure no one else does. He is important. He was here. 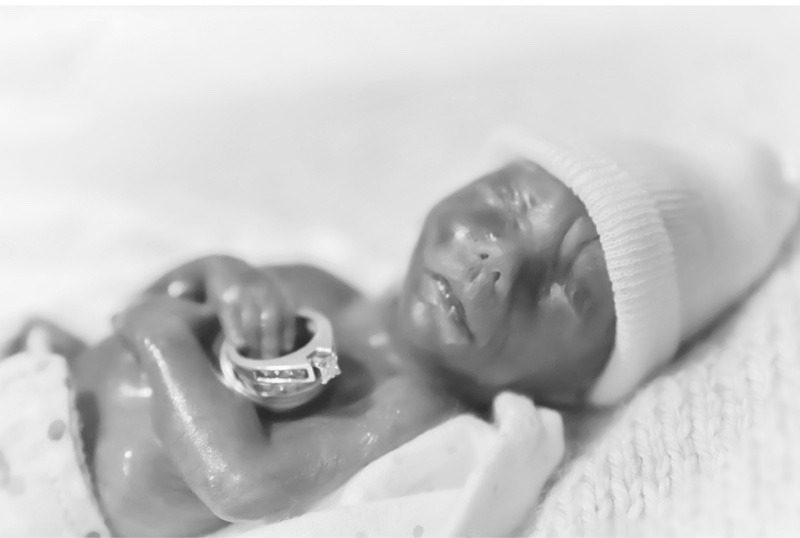